It’s another Tuesday night in Edinburgh. It’s cold and raining, so what better place to be than inside helping The Holy Smokes celebrate the release of their new EP! 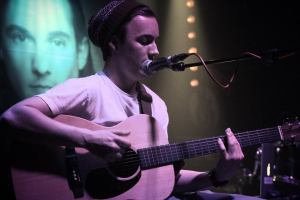 First up is Michael Barker, who introduces himself and says he’ll be playing a mixture of covers and original songs. He makes every single cover his own and performs them so beautifully. If I had to pick a favourite cover, it would be “Adventure Time” by a band called Bry. It was beautiful and quite moving. He also has some good “stage banter” and talks about this “mad hair flapping” and that he doesn’t want to “look like that wonderwall guy” *cue audience laughter*.
Michael has an incredible voice and some damn good guitar playing skills. Unfortunately, I didn’t catch the name of the two original songs he did for his set, but they were amazing! 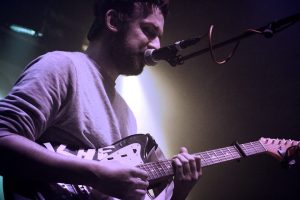 Next up is The Baroque with his incredibly soft vocals layered over an electric guitar with a laptop acting as a piano. This guy is seriously cool and amazing! The music is beautiful to put it very simply and I don’t think any more words could describe it (but seriously, it’s damn good). He has a few funny pun song names too which make me giggle a little for exmaple “Away in a Stranger” from his first album (as he points out, he’s only got the one). and “Sunshine on Grief” (for all you non-Scotland residing folks, that a pun of “Sunshine on Leith” which reminds me… I must actually see that film at some point… anyway…. his last song is from his upcoming album (Songs of Joy and Rhythm) and is called “Song of Joy” and, just like all the rest, it’s amazing and super cool and yeah, you need to check him out! Like now… I’m watching you…..

Last, but by no means at all least, come The Holy Smokes! I’ve reviewed these guys on record before, and loved them, but this my first live show and I’m VERY excited. Like “omg a new kitten” excited. They start out by playing the title track from their new E.P “Let’s Go Out Drinking” and it’s rocky, it’s fast it’s awesome! I’m stood at the back doing a little bum boogie (there’s a lot of people in the venue and I’m small and didn’t fancy getting squashed, plus that gives more room to bum boogie).

They play a lot of their songs that I already know and a few I haven’t heard before so this was a good chance to hear the difference between record and live. The difference? There wasn’t any, they are just as fabulously good live as they are on record, something not all acts can master. They even dedicate their last few songs to the “most dedicated fan in the room”. Which is a guy called Callum (sorry if that’s the wrong spelling, there’s many different ways) who came all the way from Glasgow to see them *cue crowd cheering*. They even point out that they are selling handmade t-shirts at the merch stand, along with hard copies of their new E.P.

I implore you yo check them out because they are so super duper fantasicly cool and awesome. You can find them on Facebook, YouTube and BandCamp